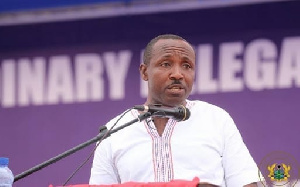 The General Secretary of the ruling New Patriotic Party (NPP) has rebuked former President John Dramani Mahama and the opposition National Democratic Congress (NDC) over comments made in the ongoing First and Second Ladies’ salary debate.

In a statement issued, Mr Mahama described the development as ‘problematic’ “an attempt to sneak the First and Second Ladies into the article 71 office holders’ group”.

According to him, the challenge is that the spouses of the President and Vice President are not captured among Article 71 Office Holders and, therefore, there is no legal or constitutional basis for it.

“It should be noted that the recommended salaries for the Spouses in the Ntiamoa-Baidu report are captured as part of the emoluments of the President and the Vice President. This seems like an attempt to sneak the First and Second Ladies into the article 71 office holders’ group. This is clearly problematic.

See also  This is madness!; beware of God's wrath

“The question then is: if the Committee recognizes the above, and therefore appreciates that there can be no legal or constitutional basis for seeking to bestow any such benefits on the spouses of the President and Vice President (VP), why then did it proceed to provide for the payment of monthly salaries pegged at the level of a Cabinet Minister to both the First Lady and wife of the VP who served in the period 2017 to 2020, even if it was conveniently enveloped as part of the emoluments of the President and Vice President?

“And why did Parliament also approve, as has been reported, this recommendation without a review?”

However, John Boadu speaking in a one-on-one discussion on Peace FM’s ‘The Platform’ programme, says the statement of the former President is ‘hypocritical’ because former First Lady Lordina Mahama also received an allowance.

It’s unfortunate Mahama dragged us to court over innocuous error –...

Place visa restrictions on Kennedy Agyapong – ASEPA to US Gov’t