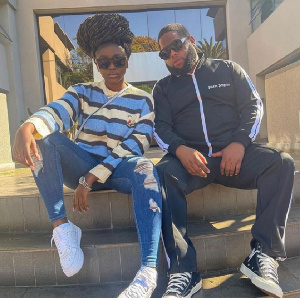 Ghanaian musician S3fa has debunked rumours which suggest that there’s a love affair between her and D-Black, owner of her record label, Black Avenue Muzik.

There has been a host of female musicians in the country who have been accused of secretly dating their label boss, in most instances, they have publicly denied this claim.

Speaking in an interview on the Delay Show monitored by GhanaWeb, S3fa noted that due to her close relationship with the BAM Muzik boss, many have assumed that they ‘have a thing’.

She has maintained that: “There is nothing between us, I think people don’t really know what goes on behind the scenes. They just see what’s on the surface and put two and two together but there’s nothing like that.

“Before I met him, I had recorded a song but it was not something that could draw people’s attention but it was okay. The first I recorded under his label was with Epixode. I write my songs but I have 2 songs which were written by Kurl Songx and Andrew Keche.”

Speaking on the back of what kept her under the Black Avenue Muzik at a time where most of her label mate called it quit with D-Black, she explained that her gratitude to her boss was what kept her at the time where things were not so rosy.

“I can’t explain why my former label mates parted ways with D-Black… I decided to stay under the label because I am very grateful and I feel that if someone even invests GH¢1 in you, it’s a big deal. He is also an artiste, it is had to come across people who willingly offer to support you to take your talent to another level so, I am very grateful so I could just leave him under the reason that things were not going well.”