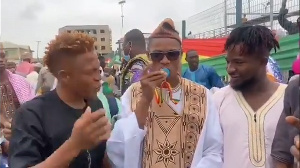 Member of Parliament for Madina constituency, Francis-Xavier Sosu, has revealed his intensions on using Accra Hearts of Oak duo Ibrahim Larry Sumaila and Nurudeen Abdul Aziz as ambassadors for his upcoming sports project.

Ibrahim Larry Sumaila and Nurudeen Abdul Aziz were part of the Accra Hearts of Oak team that won the 2020/2021 Ghana Premier League putting an end to the club’s 12-year trophy drought.

The duo who hail from the Madina constituency got this good news after presenting their Ghana Premier League medals to their Parliamentary representative during the Eid-al-Adha prayer feast.

Francis-Xavier Sosu congratulated the duo for putting Madina on the Ghana map with their performances for Accra Hearts of Oak in the just ended Ghana Premier League season.

“On behalf of Madina I want to congratulate Ibrahim Larry Sumaila and Nurudeen Abdul Aziz for their contribution to bringing fame to Hearts of Oak and I am hoping that as a member of Parliament I can work them, support and promote them to make sure that beyond playing for Hearts of Oak, some of them one day will be playing at Chelsea, Manchester United,” he said.

He added that, “We have the MP’s sports development project and since you are part of the Madina we can use you as ambassadors for MP’s sports project.”

????️ … @LarrySumaila_25 and @AbdulANurudeen1 presented their Medals to their Honourable Member of Parliament..

Also, watch last week’s episode of the Friday debate on GhanaWeb TV with Joel Eshun in the post below:

Recruitment: Good news for all Nurses and Midwives in Ghana

We can produce coronavirus vaccine in Ghana with support from govt