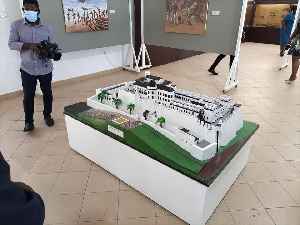 The Ussher Fort Slavery Museum has been reopened to the public after it went under rehabilitation.

It is also on the Mutual Heritage List established jointly by the Ghana Museums and Monuments Board (GMMB) and the Netherlands Department of Conservation.

The rehabilitation was done to enhance the experience of visitors in the museum and Accra in general as well as strengthen the capacities of GMMB staff and selected community members from Ussher and James towns in methods of preventive conservation.

It also contributes to the ongoing preparation of a management plan for the Forts and Castles of Ghana, which is funded by the International Assistance under the World Heritage Fund.

Speaking at the ceremony, Netherlands Ambassador to Ghana Ron Stikker expressed regret at the activities of the slave trade by his countrymen.

According to him, the Dutch look at history with a lot of regrets, deep disgust, repentance, and that they see it as sad.

He indicated that the history of the slave trade is historical truthful stories that should never happen again.

To him, facing the past helps to tackle the future together adding, “what we can do and must do is to uphold the values that we share today, including respect for human rights and human dignity and that basis put our hands together to better our lives.”

On his part, the Acting Executive Director of the Ghana Museums and Monuments Board, Mr. Agyemang Duah said the Fort is in the very heart of Gamshie and the GMMB has discussed preparation towards the new management plan of the forts with sections of the community that included our intellectual chief priest and advocates.

See also  Gun-wielding men in viral video, reverend who is brother of one remanded

He said his outfit has outlined curational activities and will do soo too with the Ussher Fort with the new openings.

He expressed gratitude to UNSECO and the Netherlands for the support in rehabilitating the Museum.

All Covid-19 protocols he assured would be followed as the facility is now opened for public viewing.

Head of UNESCO Office, Accra Mr. Diallo Abdourahamane said his outfit was prepared to assist African countries to retrieve all stolen artefacts by slave masters to their countries of origin.

He added that rehabilitation contributes to having a safe, accessible and sustainable World Heritage property to ensure its effective protection for now and posterity as per the 1972 UNESCO World Heritage Convention on the Protection of Cultural and Natural Heritage.

The fort was built by the Dutch in 1649 and is located in Accra, the capital of Ghana. It has a rich history of having been a trade post, slave dungeon, a police post and a prison. It was also used for military detention and served as a court Marshall unit and a refugee camp for both Liberians and South Sudanese at some period in time.

Most recently, it has been housing a museum of slavery that has been temporarily closed since 2014.

Bawumia has been of great help to my government- Akufo-Addo

Involve The Youth In Governance For Inclusive Development – Bagbin |...

COVID-19: Ghana to be selected as manufacturing hub for vaccines in...