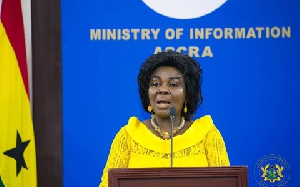 • Many of 8,100 litter bins distributed to some parts of the country have been destroyed

• According to the sanitation minister, the government will not give up on these headstrong Ghanaians

• Meanwhile, motorized tricycles, litter bins and skip containers have been supplied to the Assemblies in Greater Accra

Waste management remains one of the major challenges the country is facing.

As several strategies including the mounting of litter bins at some vantage points in the country have been put in place to curb this menace, some Ghanaians are also destroying it for reasons best known to them.

The Sanitation Minister, Cecilia Dapaah said the government procured a total of 8,100 litter bins which were delivered in Accra and 3 other regions.

Some of these bins are in a poor state because some Ghanaians are manhandling them but the Sanitation Minister, Cecilia Dapaah has indicated that government will not give up on Ghanaians with bad environmental attitudes.

She explained that this is to inculcate good hygienic practices into Ghanaians for all to keep the country clean.

The sanitation minister said, “We have procured 8,100 litter bins that have been distributed in Accra, Kumasi, Takoradi. We have also done so to some institutions including GJA, Army and the police.”

“We will still continue the agenda to inculcate good hygienic practices into all of us. Most of these bins have been bastardized but we will not give up on the Ghanaian. We know that we will all come through to making Accra and our big cities a clean place,” she added.

She noted that motorized tricycles, litter bins and skip containers have been supplied to the Assemblies in Greater Accra to help in waste management in the country.

Bawumia has been of great help to my government- Akufo-Addo

I’m expecting something high – Prince Obeng Ampem after signing for...

Dzata cement is not GHC30, we are yet to decide price...