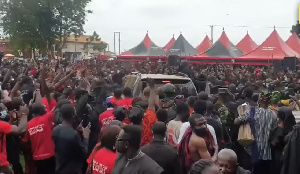 • Calls have been made for the state to take action

Four persons, three of whom are believed to be leaders of the Christ Embassy Church are currently facing trial for violating laws on public gathering which came about as a result of the Coronavirus pandemic.

Their sin which was widely condemned by Ghanaians was the hosting of a program christened the Pneumatical Night, at which thousands of worshippers gathered at the Fantasy Dome without nose masks and other COVID-19 protocols.

That event happened in March and while the police were commended for acting proactively, some Ghanaians including the National Communications Officer of the National Democratic Congress, Sammy Gyamfi called them out for selective justice as they failed to arrest anyone when politicians breached the protocols with impunity during the electioneering period.

The elections have passed, and another test case has been presented for the police to show that the mantra ‘equality before the law’ is not mere words but something that law enforcement agencies hold in high esteem.

The funeral of the late Chief Executive Officer of the Forestry Commission has presented another venue for police to clampdown on persons who breached or caused others to breach the Coronavirus protocols.

Just like the Christ Embassy incident, identities can be put to some of the face behind the organization of Sir John’s funeral.

One of such persons is the Director of Special Duties at the Forestry Commission who is a family member of Sir John and the person who put in place measures to fly the body of the former NPP scribe from Accra to Sakora Wonoo, where funeral and burial took place last week.

“Just a day to the funeral I called the Major General Thomas Oppong-Peprah, that I needed help to transport the body of his brother (Sir John) home. He asked me to come home and within a minute we concluded everything. No one knew about it, even the people I was to go to Wonoo with were not aware we were going to fly the body.

“I made the arrangements and after they came I informed them that we are going by air so they should inform the family so that they prepare for us. We flew the body straight from Accra to Wonoo so I want to express my gratitude to the pilot for the help,” he told Okay FM.

Pictures and videos from the funeral ceremony show that in conveying the body from the aircraft to the house where he was laid in state, thousands of mourners, most of which were without nose masks or observing COVID-19 protocols thronged the place to have a view of the casket.

In his last Coronavirus address on May 16, 2021, President Akufo-Addo stated that the Imposition Of Restrictions Act of 2020 which include a ban on funerals but burials with persons not more than 25 was still in force.

“Until we vaccinate the requisite numbers of Ghanaians, and achieve herd immunity, which will help return our lives to normalcy, the Imposition of Restrictions Act, 2020 (Act 1012), will remain in force, and the security agencies will not relent in their efforts to enforce it,” he said.

Leading members of the NPP including Chairman Freddy Blay and Deputy General Secretary Nana Obiri Boahen have been quick clarify that the event at Sakora Wonoo was a family event and not a party or government event.

“The arrangement was such that most of the people were going to be in mask. Be it as it may, the gathering was something else… I take into consideration the expression of the GMA and OccupyGhana.

“However, it was the family that organized the funeral and we were invited. It was not a funeral that was officially organized by the government or the party. It’s unfortunate that most of the people were NPP activists. It wasn’t a government or party event. We were not expecting the numbers that were there,” Obiri Boahen said.

So question now is, will the police arrest and prosecute the organizers and family of Sir John as they did in the case of the Christ Embassy culprits?

Let’s Not Allow Religion To Divide Us – Charles Owusu Rebukes...