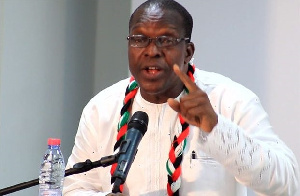 •Alban Bagbin has told MPs that their complete immunity from prosecution

•They may, however, be served when Parliament is on recess but not within the corridors of Parliament>

The Speaker of Parliament, Alban Bagbin, has told Members of Parliament(MP) that their immunity stated in Articles 117 and 118 of the Constitution is not absolute.

According to the Speaker, the Constitution allows the courts to serve court processes on MPs who fail to observe their duties in the House.

Addressing MPs on Wednesday, Alban Bagbin said some MPs evade attempts by court officials to serve processes on them during recess.

This development, he described as unfortunate as he called for mutual respect between the legislature and the judiciary.

Mr Bagbin also lamented on court processes served on some MPs when the House is in sessions without recourse to the Speaker.

He went on to lay out an 11-point guideline on how parliamentarians can be brought before courts.

As of now, MPs cannot be served with processes when parliament is in session without recourse to the Speaker.

Parliamentarians cannot be served with court processes whilst within the boundaries of House without recourse to the Speaker.

But they can be served when Parliament is on recess but not within the boundaries of Parliament.

MPs are to direct service of court processes to the Speaker if they are to be served when the House is on recess.

Where a member accepts service of processes and has entered appearance, the member is said to have become a party and will thus not be covered by immunities provided under the constitution.

Monopoly of WAEC must be broken – Clement Apaak