Actress Yvonne Nelson is said to have tied the knot secretly with an Italian, multiple portals have reported although there are no pictures nor videos from the supposed ceremony.

The reports are based on two social media posts – one from Yemmey Baba, a Ghanaian-based Nigerian blogger, and Adu Sarfowaah, the actress who recently claimed that colleague Moesha Boduong is under a form of spiritual attack following a sexual encounter with a business mogul.

Yemmey Baba is quoted to have stated that the ceremony was held a fortnight ago.

“Congratulates one of Africa’s finest screen goddesses, YVONNE NELSON as she tied the knot with her Italian sweetheart (name withheld)”. The highly secured ceremony -which we were there- took place two weeks ago. To many, instead of getting shocked to the marrow asking, ‘how?’, ‘when?’, ‘where?’, forming all ‘Nicodemus’ on why she didn’t first of all come and seek for your permission or approval on (from) social media; try to find out and stick to the recipe that’s tasting nice for the newly wedded diamond-ring beauty, HAPPY MARRIED LIFE, Yvonne,” Yemmey Baba wrote.

Adu Sarfowaah’s post was, however, cryptic as she only congratulated her colleague.

While Yvonne Nelson is yet to react to any of the aforementioned posts, some have described the development as a façade. They have argued that it is a plot to publicize an upcoming movie, considering that the posts from Yemmey Baba and Adu Sarfowaah captured ‘happymarriedlife’ which could be the title of the movie.

Others, on the other hand, believe the story, citing how news of Yvonne Nelson’s affair with British photographer Jamie Roberts spread and later turned out to be true. Their relationship led to the birth of a daughter, Ryn Roberts. They later broke up. 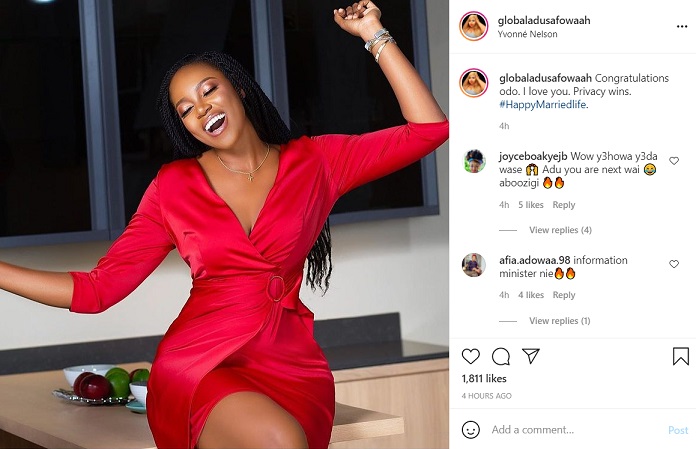 There is Nothing Like Equality In Marriage-Counselor Charlotte Oduro [Video]